Vinh Moc Tunnels – A Cultural and Historical Relic in Vietnam

During the fierce bombing years, no one could have imagined that there was a Vinh Moc Tunnels – a living and fighting site in the ground, completely isolated from the outside world. Vinh Moc Tunnels is a cultural and historical relic with great historical and educational values, a symbol of the nationalism, solid will and the creativity of people during the war time. Coming to Vinh Moc Tunnels, visitors will feel the arduous endurance, endless creativity and brave fighting spirit of Quang Tri’s army and people in the war time.

Where is Vinh Moc Tunnels?

Vinh Moc Tunnels is located in Vinh Moc village, Vinh Thach commune, Vinh Linh district, Quang Tri province. On the road lined with green bamboo, perhaps few people know that right below their feet is a system of tunnels, an underground world of Vinh Linh’s army and people during the years of war since 1965 to 1972. 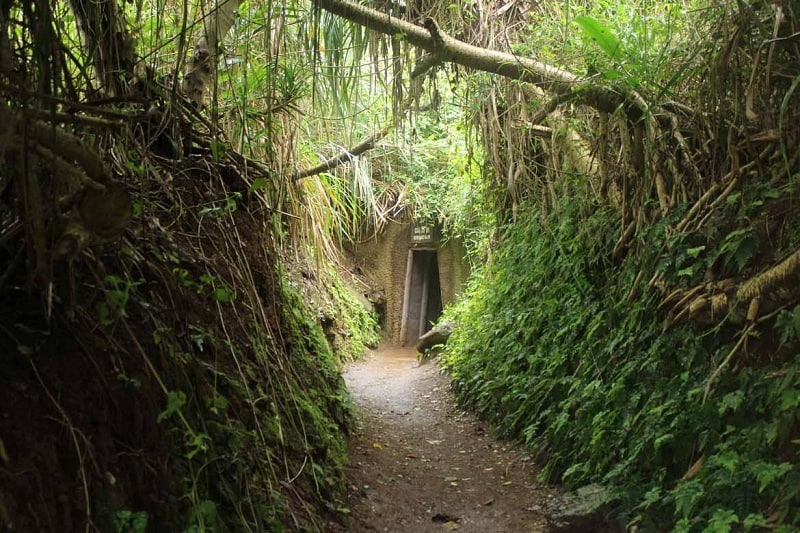 Among many revolutionary bases in the land of Quang Tri, the Vinh Moc Tunnels system is a symbol of the unyielding will. In 1965, Vinh Moc village was completely destroyed under the devastating attack of the US air force and artillery. With the spirit of fighting, Vinh Linh’s army and people have silently moved their lives from the ground to the underground. After 18,000 days of hard work, the soldiers of Border Guard Station and 140 people of Vinh Moc and Son Ha dug and transported more than 6000m3 of soil and rock to create a massive tunnels system on a hill in the south of Vinh Moc village. 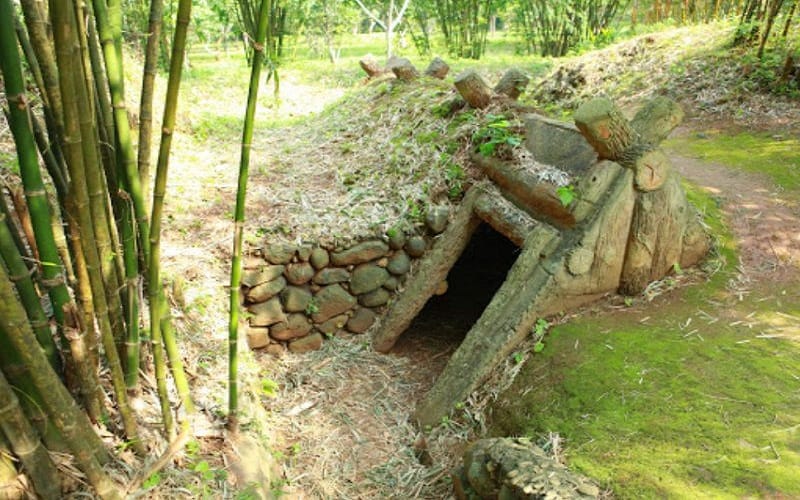 The system of Vinh Moc Tunnels has a dome-shaped structure measuring 0.9m x 1.75m and 2,034m long, including many branches connected to each other through a main axis of 870m long. The tunnel has 13 doors, 6 doors are connected to the hill, 7 doors are facing the sea and 3 ventilation wells. Moreover, the hatches have wooden columns to prevent collapse and landslides, discreetly disguised, inclined to the wind direction, ensuring ventilation. The ground of Vinh Moc Tunnels is dug 5m higher than sea level, inclined from 8 to 120 degrees from South to North, from West to East so that water can be easily drained, avoid the stagnation in the tunnel, all activities still work normally even in the rainy season. Thanks to that, the clay in the tunnels became harder and solider, making the Vinh Moc tunnels ‘s structure still exist to these days. 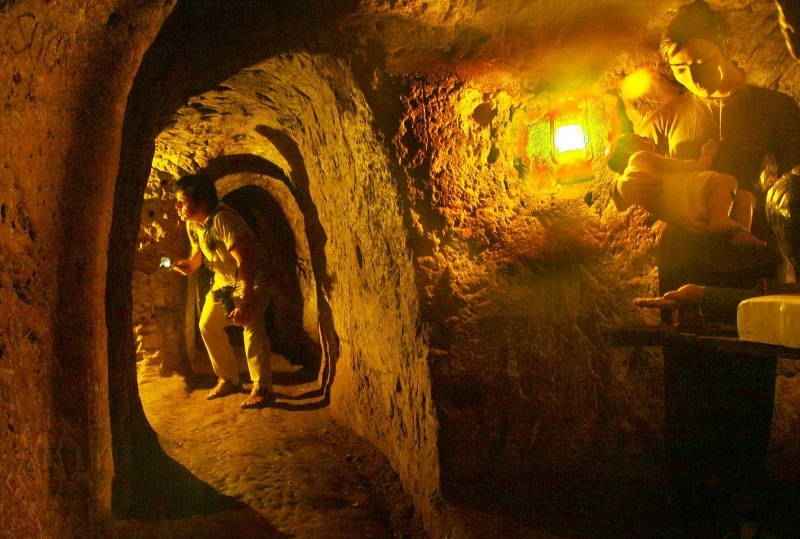 Vinh Moc Tunnels is not only a battle tunnel like other constructions, but also an underground living space of soldiers and locals. They turned the ground into solid fortresses with three interconnected floors. The first floor is 8-10m deep, used for combat and shelter. The second floor, 12 to 15 meters above the ground, is where the villagers live. The 3rd floor is more than 23m deep, used as a warehouse for food and weapons for Con Co island as well as for fighting for the Vinh Moc tunnels and soldiers. 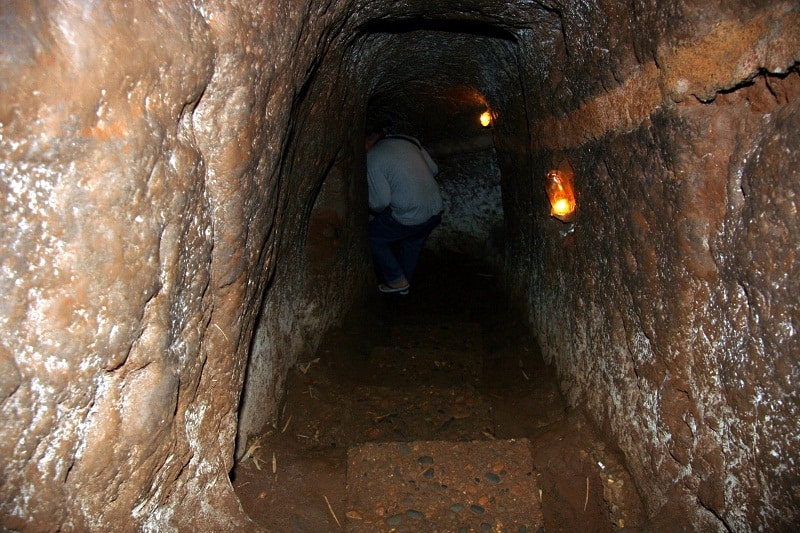 Vinh Moc tunnels is an underground village with many works such as resident water wells, rice storage, Hoang Cam kitchen, guard station, telephone station, hospital, operating room, house. midwifery and bathroom… Especially, along the both sides of the tunnels, there are rooms for households of 3-4 people. There is also a hall used as a meeting place, cultural performance, movie screening with a capacity of more than 50 people inside the tunnel. 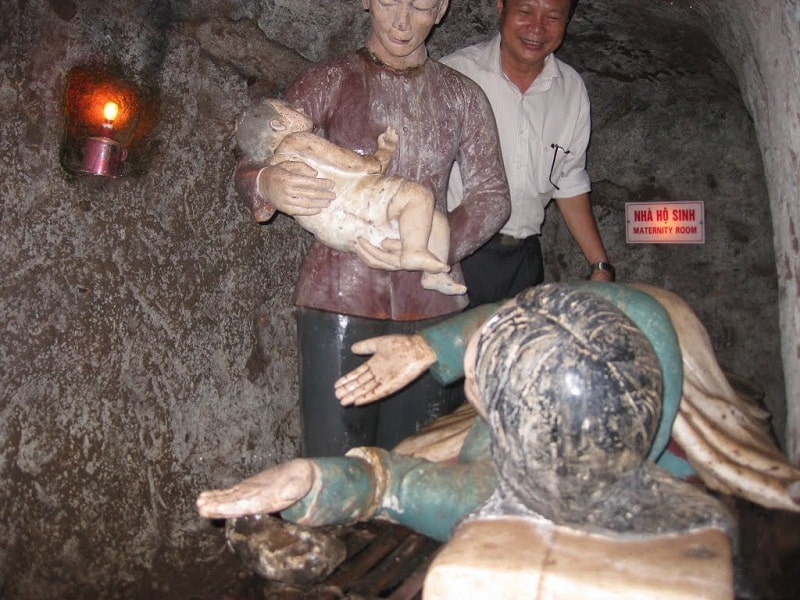 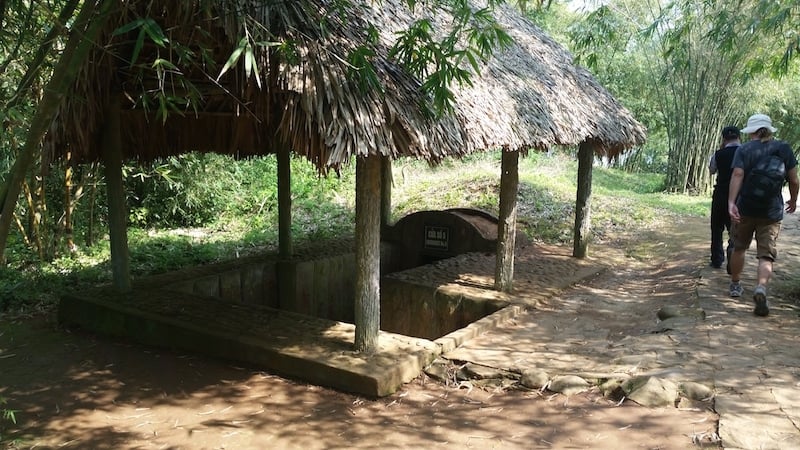 How to Get to Vinh Moc Tunnels?

It takes 90 minutes to drive from Dong Hoi city ( 80km) to Vinh Moc Tunnels, and around 2 hours from Hue city (110km) if you travel by private car/ taxi.

Vinh Moc Tunnels – an extremely unique construction in the underground of Quang Tri is a cultural and historical relic with great historical and educational values, has become a place of lively patriotic tradition education for young generations, an interesting, attractive and unique tourist destination for young people and visitors.