Da Nang City is famous for long romantic beaches, the city of unique and impressive bridges. One of the highlights of this city is the bridges connecting the Han River. It not only helps people travel more smoothly, but also connects trade, creates the motivation for economic development, and creates a unique feature for the city with new architectures and unique design ideas. When the night falls on the Han River, the bridges become more colorful with the colored lights, adding to the charm of a dynamic young city. One of them is Thuan Phuoc Bridge – the longest suspension bridge in Vietnam.

Thuan Phuoc Bridge is designed to cross the Han River with a total investment of nearly VND 1,000 billion built on February 16, 2003 and completed on July 19, 2009. This bridge plays an important role, a floating silk strip on the banks of the Han River, bringing in itself a magnificent beauty but very gentle, attracting any visitors when visiting.

Thuan Phuoc Bridge is designed  with four lanes and three spans. It is 1,856 meters long and 18 meters wide, and has a main span of 405 meters. This is also the first suspension bridge in Vietnam which is structured with alloy steel box girder throughout the entire suspension span of 655m, made with hardened beam technology according to international standards.

In addition, with the idea of lighting design as the image of a bird wing towards the sea, Philips company has used the Led system with the latest technology that the company is using for bridges around the world to highlight the architecture and magnificent beauty of Thuan Phuoc bridge.

Along with new architectures and unique design ideas, Thuan Phuoc Bridge is a destination to attract tourists. Especially, when the night falls on the Han River, Thuan Phuoc Bridge becomes more colorful under the colored lights, adding to the charm of a dynamic young city. It helps visitors admire the beautiful city of Danang at night. Tourists can go to Thuan Phuoc Bridge to experience when night falls. Everything is displayed in front of the other bridges connecting the banks of the Han River, the buildings or the sparkling lights, … Visitors will leave their soul in the middle of the sky and enjoy a very interesting experience.

From all points of view, Thuan Phuoc Bridge has a modern, splendid and charming appearance. The bridge is located in a special position, where the Han River flows into the sea at the mouth of Da Nang Bay, connecting the two coastal roads of Nguyen Tat Thanh and Hoang Sa – Truong Sa, forming a system of inter-regional transportation routes, from Hai Van Tunnel to Son Tra Peninsula, across Man Quang Bridge and connecting with Son Tra – Hoi An tourist route. Since then, a transport – tourism system has been completed, opening up the possibility of exploiting tourism potential not only for Danang but also for neighboring localities such as Hoi An and Thua Thien Hue. 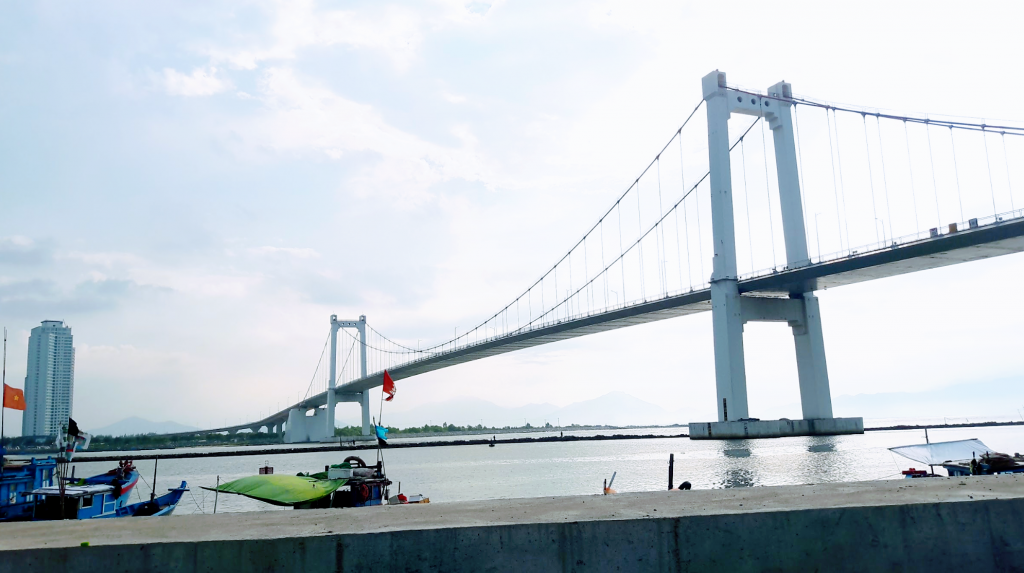 If the Han River swing bridge is the first bridge marking the development milestone of the city, witness the transformation of the east of the Han River; Dragon Bridge and Tran Thi Ly New Bridge with the image of the dragon and the sail reaching out to the big sea, showing the dynamism and the will of the people of Da Nang, the Thuan Phuoc Bridge stands tall at the end of the sea. The river captivates people by the beauty of elegance, sophistication and highlights with the shimmering lights in the immense water.