Minh Mang Tomb is a relic in the complex of Hue ancient capital which was recognized by UNESCO as a world cultural heritage on 11-12-1993.
Minh Mang Mausoleum, also known as Hieu Lang, is the last resting place of the second king of the Nguyen Dynasty – King Minh Mang. This tomb was built by King Thieu Tri – the son of King Minh Mang, located at An Bang village in Cam Ke Mountain which is 12 km from Hue city center. It belongs to Huong Tho commune, Huong Tra town, Thua Thien Hue Province. 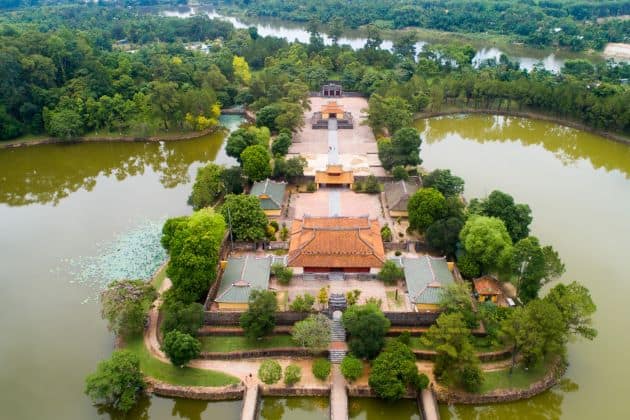 Minh Mang Mausoleum was built in 1840 and completed in 1843 with the effort of ten thousand workers and artisians. It can be said that this tomb is different from the rest of imperial tombs because of its archiecture. Minh Mang is one of the most mystical tombs of Nguyen Dynasty that combines between landscape and architecture buildings. Visitors will get astonished to find a place of art and poem while exploring this mausoleum. 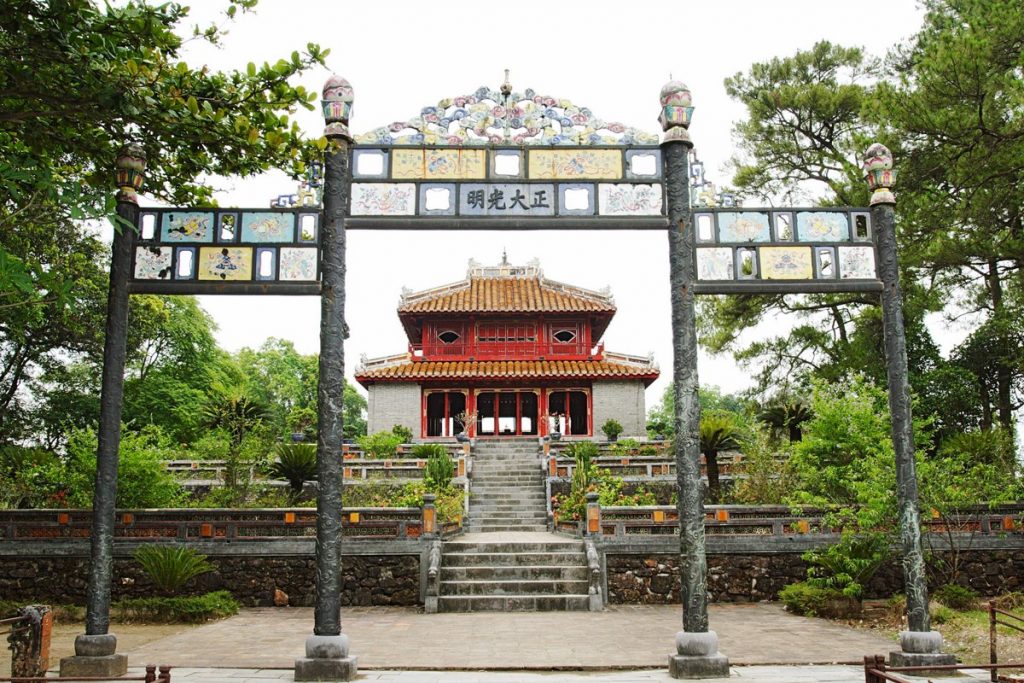 Minh Mang Tomb is large-scale architectural complex of about 40 large and small constructions including the palaces, temples and pavilions, etc, arranged on a vertical axis from Dai Hong Mon to the foot of La Thanh (Surrounding Wall) behind the King’s tomb. The overall of Minh Mang Tomb is divided as follows:

Dai Hong Mon is the main entry gate to the tomb-the typical gate of Nguyen Dynasty. People opened it only once to bring the Emperor’s coffin into the tomb and closed it since then. Thus, all the visitors have to use the Ta Hong Mon (Left Gate) or Huu Hong Mon (Right Gate) when visit this tomb. 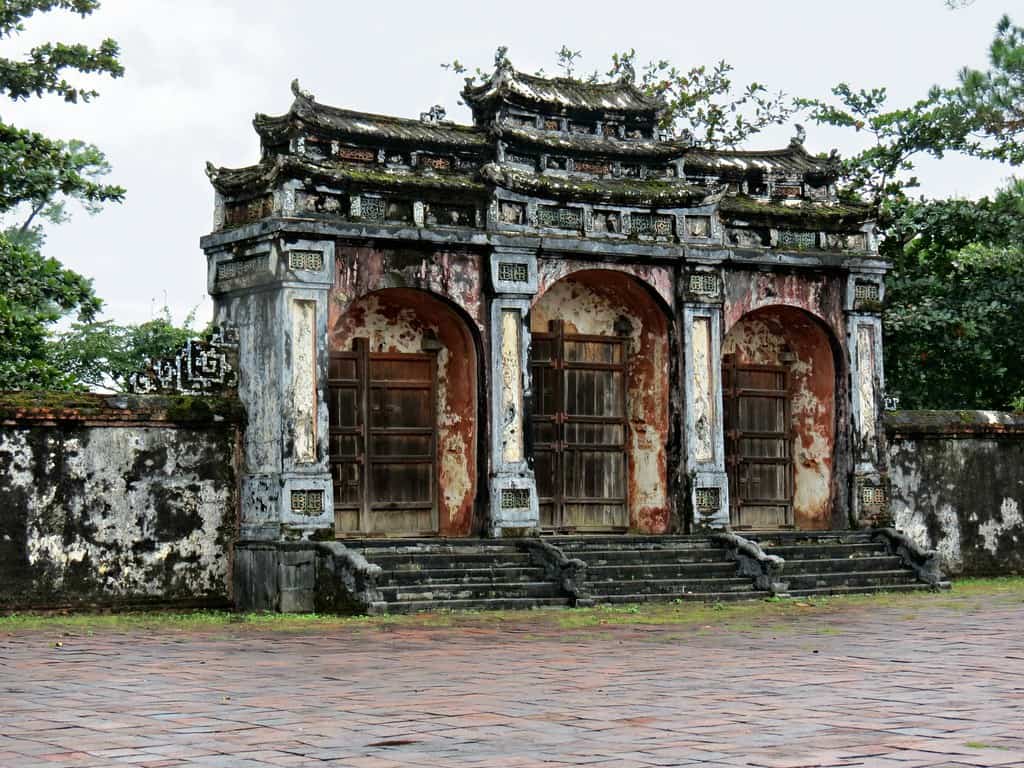 Bi Dinh is a large yard behind Dai Hong Mon with two rows of mandarins, elephants and horses’ statues. Bi DInh is located on Phung Than Son mountain. Inside, there is a memorial stone stele “Thanh Duc Than Cong” written by Emperor Thieu Tri on the biography and merits by his successor, Thieu Tri Emperor. 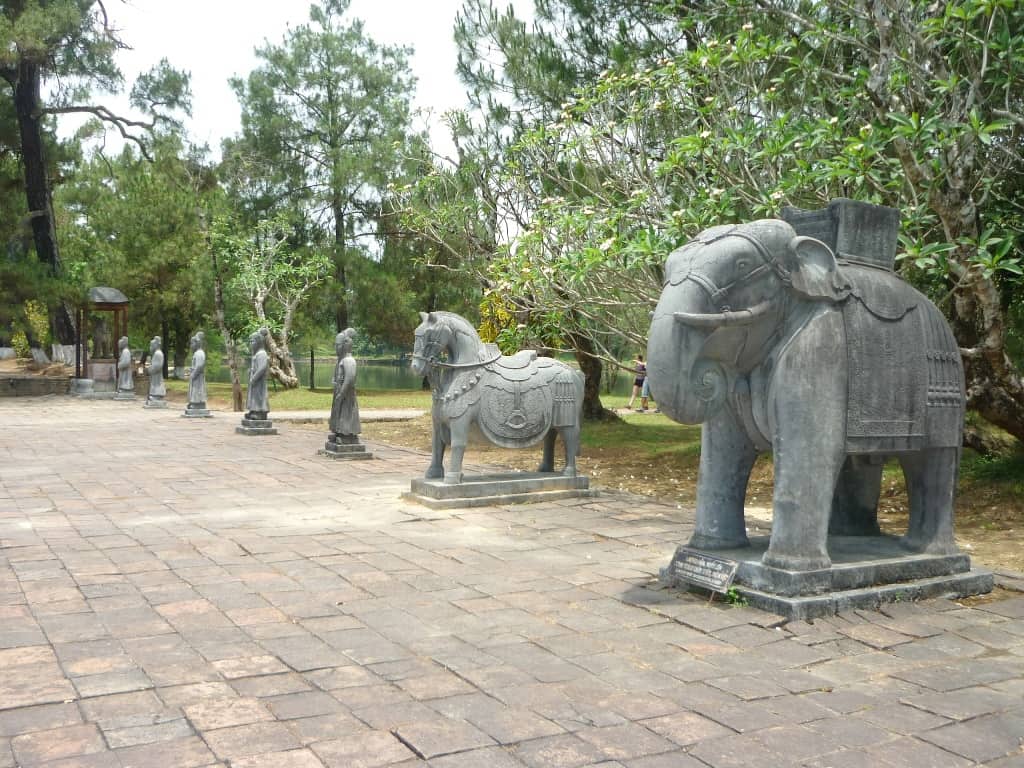 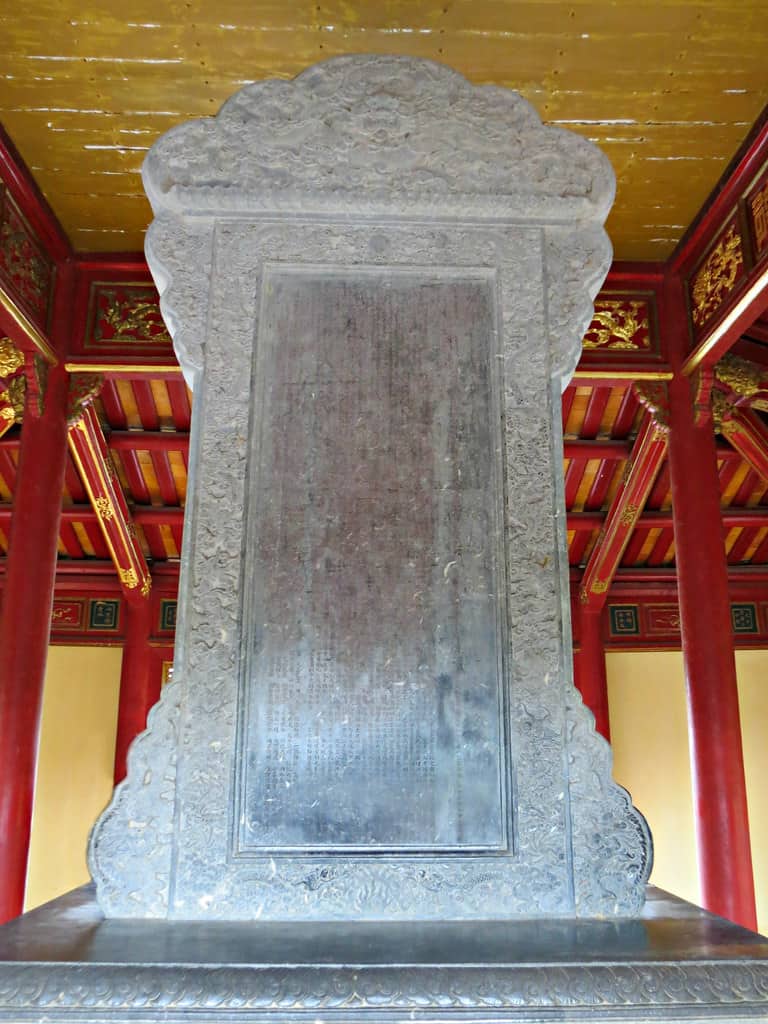 The Temple area: Visitors have to come over Hien Duc gate, the main gate of the temple area, locates within a square wall that symbolizes the earth. The inside area of the palace is where worshiping the Emperor and the Queen. Hoang Trach Mon is the last structure of this area with fragrant flowers. 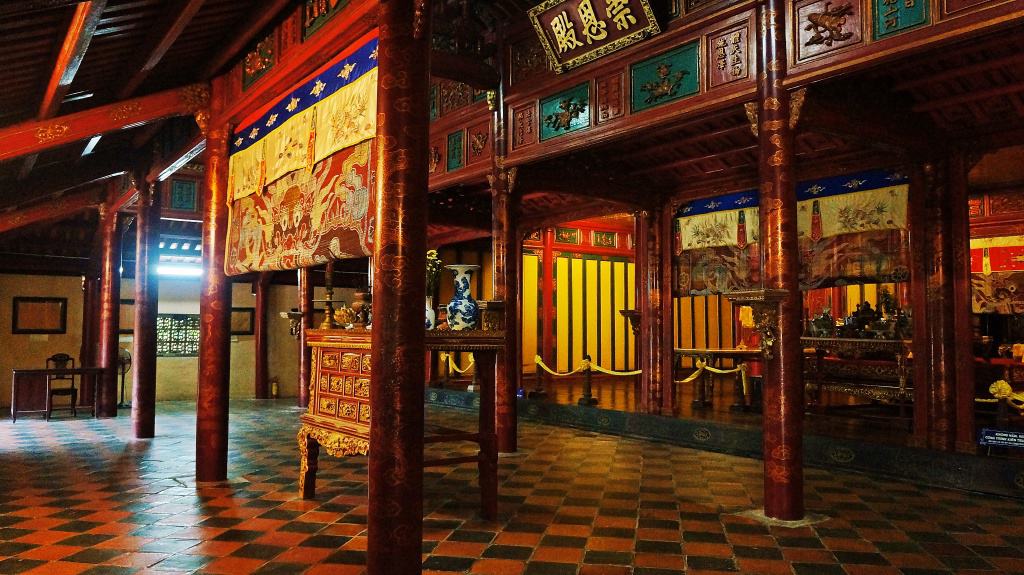 Minh Lau Pavilion: Crossing over Trung Minh lake, visitors will go to Minh Lau pavilion. Minh Lau means bright pavilion and the Emperor often went there to enjoy a pleasant breeze and moon nights. This building has a square shape with two floors and eight roofs. At the behind of Minh Lau are two flower gardens designed as the character “Longevity”. 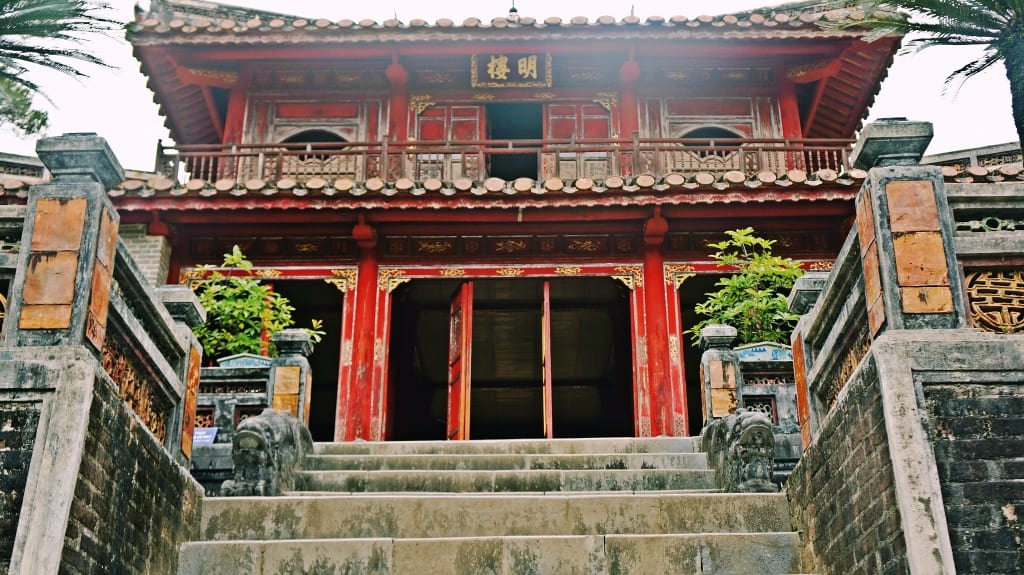 Tan Nguyet Lake – the crescent-shaped Lake of the New Moon embraces Buu Thanh and provides an image of an endless world. Passing Thong Minh Chinh Truc bridge across Tan Nguyet lake, there are 33 stone steps to the resting place of the King, located on the center of Khai Trach Son hill surrounded by circular Buu Thanh wall.

When visiting Minh Mang Tomb, the visitors will feel the difference from the other tombs of the Nguyen Dynasty because of its harmonious beauty, tranquility and hidden potential life. Coming to Minh Mang Tomb, you do not feel the air of solitude and mourning but the purification and revival between life and death.
Minh Mang Tomb displays the harmonious connection between the earth and people to create the soul. The impressive thing that makes people come to visit this mausoleum is the beauty of the landscape painting that nature offers. A profound concept of harmony, unity, harmony of nature and people; balance, gentleness in thought. Minh Mang Tomb is one of the top tourist destinations in Hue that tourists from all over the world want to experience and explore.